It’s been more than a decade since CoolSculpting was FDA cleared for providing non-invasive fat reduction from the double chin to the banana roll and just about any place in between. By now, the treatment has earned worldwide recognition for its ability to freeze away unwanted fat just where you want to. Allergan Aesthetics, the makers of CoolSculpting, have just introduced CoolSculpting Elite, a new and improved device. But CoolSculpting is already pretty great, so is it possible that CoolSculpting Elite could really be better?

CoolSculpting Elite is better than CoolSculpting because its improved engineering and reshaped applicators deliver better results that are visible sooner to 100% of patients.

Like CoolSculpting Legacy, the Elite system is FDA cleared to treat bulges and trouble spots like the belly, inner and outer thighs, buttocks, muffin top, back, upper arms, below the butt, and even under the chin. CoolSculpting Elite works with the same fat-freezing technology, called cryolipolysis, to damage fat cells below without breaking the skin. The fat cells rupture, and your body naturally eliminates them over time.

Once those fat cells are gone, they are gone forever, so CoolSculpting Elite provides permanent results. If a patient maintains a consistent weight, belly bulges and spare tires will not return.

Which areas can be treated with CoolSculpting Elite?

CoolSculpting Elite can reduce unwanted fat on nearly any area of the body, which is one of the reasons its predecessor has been such a go-to treatment since it was introduced. Unlike diet and exercise, which do nothing to spot reduce, CoolSculpting has been able to target specific trouble zones.

Specifically, CoolSculpting Elite is FDA cleared to treat visible bulges in the abdomen and flank, bra line and back fat, underneath the buttocks, thigh, upper arm and both submental and submandibular areas. Some of these places on the body go by less official names like love handles or batwings, and those last two mean below the chin and the jawline.

A major factor in CoolSculpting Elite’s ability to provide better, faster results is the new curved applicators, which mimic the body’s natural curves and have an 18% larger cooling area. The shape allows the Elite system to draw in significantly more surface area – up from 65.7% contact to a whopping 96.6% – and target more fat during each treatment without affecting surrounding tissues.

That makes CoolSculpting Elite an ideal body sculpting solution for anyone struggling to lose unwanted fat, especially in specific areas.

Contact us today to get started on your journey to a permanently better body - and feel ageless. 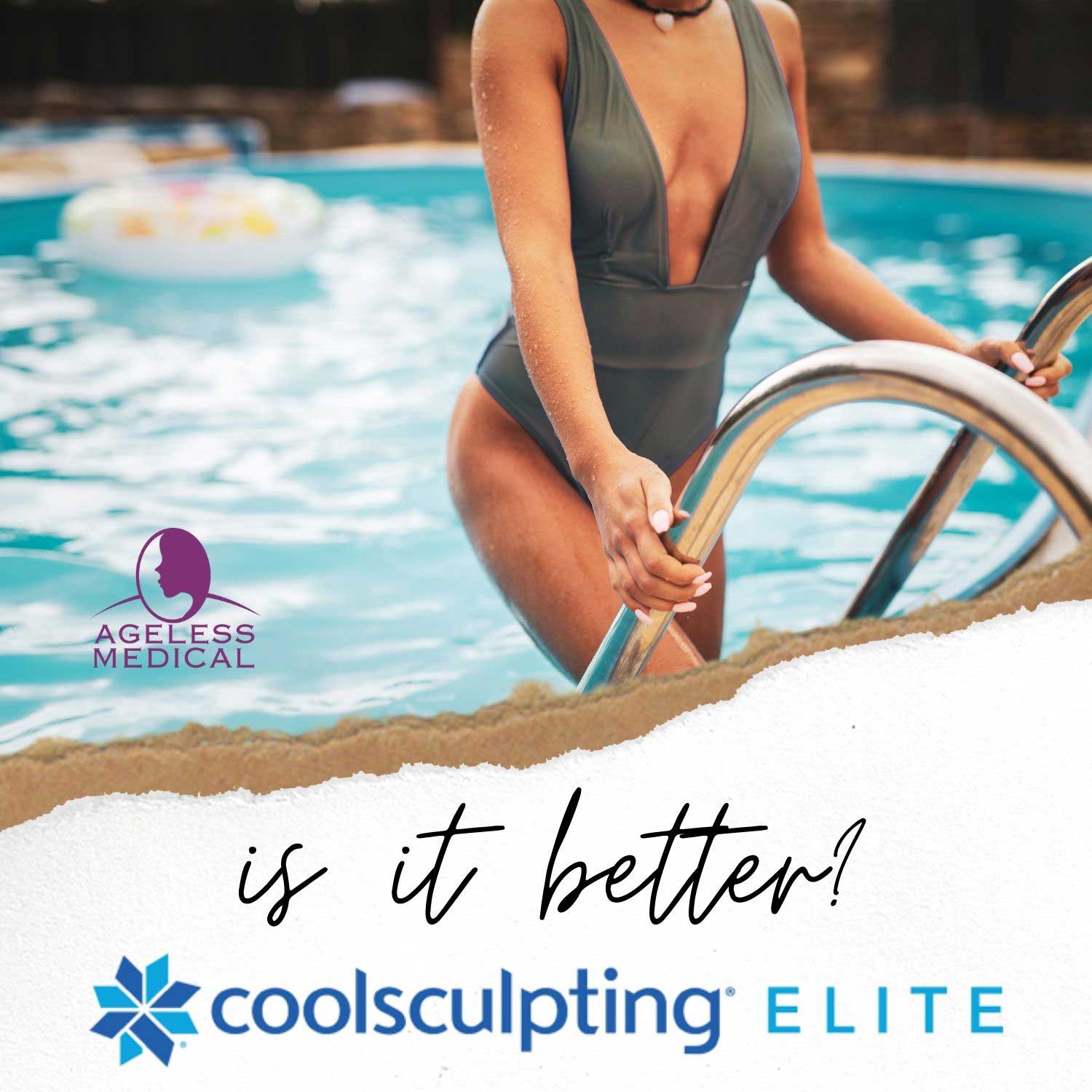 This next-generation treatment uses controlled cooling, and patients find CoolSculpting Elite appointments extremely relaxing. After a few minutes of pressure and intense cold, the tissue becomes numb, so there is no discomfort. The new Elite system is much quieter than the original CoolSculpting, so reading or even napping during the treatment is common.

Treatment time is just 30 minutes to an hour, and with dual Elite applicators, you can treat two areas at once. Afterwards, you can return to normal activities and sit back to watch as your unwanted fat slips away over the weeks following treatment. With CoolSculpting Elite, patients see a difference in as little as two or three weeks! Your final results will be achieved in four to six months after your treatment.

How much does CoolSculpting Elite cost?

The average cost of a CoolSculpting Elite treatment depends on a few factors – how many areas are being treated, which areas they are, the number of applicators used and how many treatments you will have. These are details that will be worked out during your initial consultation. But don’t think that better means more expensive because the price of CoolSculpting Elite is on par with that of CoolSculpting.

Ready to get started?

Ageless Medical has been providing successful CoolSculpting treatments to discerning patients in South Florida for more than a decade. With the launch of CoolSculpting Elite, we are thrilled that we’ll be able to boost those results and watch patients achieve them faster. Contact us to find out more about how CoolSculpting Elite can help you reach your body contouring goals.